Sometimes God takes us in a different direction than where we are headed…if we’re open to it, this “about face” can bring unexpected joys.

My get away plans were to explore the Grand Tetons of Wyoming…camping, scenic drives, singing out under the stars.  I made it into southern Wyoming before having a sudden epiphany of “this is not where I’m supposed to be” and turning the car around.  I’ve been coming to Estes Park & Rocky Mountain National Park for over 20 years.  It is my second favorite place on the planet and one of only 2 places I’ve ever found myself able to sleep without ear plugs.  God bless the individual who invented the sleep machine—that gadget that simulates nature sounds.  But it is certainly no match for God’s Sleep Machine—a raging river after a season of hard rains. Nightly the Big Thompson River sings its lullaby and I obediently succumb to its charm after a hard day of hiking and climbing and exploring God’s glorious creation.   The trails here are often strenuous but the vistas make it all worthwhile.  One of my favorites is a mountain range called “Never Summer”…couldn’t believe my eyes when I saw tourists having snowball fights in the middle of

The view from my campsite is serene…mere inches from the river, I study the waves downstream.  I’m witnessing the sun coming up over the waters, sunlight glistening on dancing waves as the river sings its roaring song.  And just as morning light begins to cascade down the rock wall to the north, birds join in the chorus while thousands of aspen leaves wildly applaud.  The sky is as bright and blue as a Swedish child’s eyes.  A fly fisherman enjoys his solitude methodically 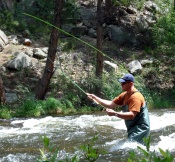 casting & stripping in his line.  He makes his way upstream and shoots me a smile as we share this secret of tranquility.  It’s the deepest human interaction I’ve experienced in days.

I came with Bible in hand and prayers on my lips.  And though my world is in a bit of God-ordained chaos right now, there are no questions weighing heavy on my heart at this moment.  Rather, there is a fixed sense of serenity and awe at the wonder and majesty of the One who created this scene, the One who set the stage making it possible for me to be in His audience this morning.

“I know that whatever God does lasts forever; to add to it or subtract from it is impossible.  And He has done it all in such a way that men must feel awe in His presence.”  Ecc. 3:14

Child of God, Follower of Jesus, Sister in Christ, Friend to the lost... View all posts by DiAnna Steele

2 thoughts on “About Face”