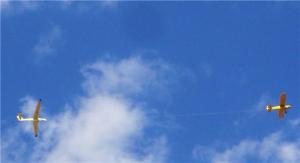 Against the majestic backdrop of Colorado’s lush Front Range Foothills, USAFA single engine Piper Cubs hummed over my head.  An early morning errand found me on the Air Force Academy at the north end of Colorado Springs.  After several chilly overcast June days causing me to debate whether or not to turn the heat back on, sun-kissed blue skies were a welcomed relief.

The familiar sight of small aircraft each towing a glider greets me often on the Academy.  Yet today I was particularly captivated by the exercise.

I recalled a recent conversation with a dear friend who earnestly longs to be in the center of God’s will but who, like many Christ followers…myself included…often wonders if he is on the right path.   Questions were posed, “How do we ever know for sure which way God is leading?  What if we mess it up?”

In this moment of pondering these questions anew, God directed my eyes to the aerial display.  I watched in fascination as the planes pulled gliders attached by a very strong but lightweight cable, almost invisible from below, across the Colorado sky.

USAFA gliders are structurally identical to Piper Cubs  with one distinct exception—gliders have no engine.  Only the Piper Cub has power. To become airborne, a glider is totally dependent upon the airplane.  Whether a glider rises or falls is within the careful control of the plane’s pilot.  Fortunately, because of extensive training completed by the Piper pilot, he is skilled to know precisely what he is doing.  A glider pilot may have complete confidence in his instructor’s watchful eye.

The two travel in sync together, aided by constant radio contact back & forth.  The plane leads, rises, then levels off while the glider pilot is tasked simply with following and learning.   The ultimate goal is to teach new pilots the most basic fundamentals of flight in the most pure and simple method possible.  Zoomies, as these cadets will be referred to upon graduation, are learning to maximize the ability to fly without a power source of their own.

The glider pilot may position his hands on his steering yoke or stick, but he accepts that while he is in tow the controls are not significantly at his command.  He can steer left or right to some degree but primarily he is there to follow at a designated distance on a predetermined path, trusting in the power and wisdom of the one who leads.  He is where he is, high above a mundane concrete runway, soaring to new heights only because he accepts his position of attachment and followership.  In submission and following, he is secure.

As soon as a glider detaches from the airplane, it will begin to fall to the earth.  Powerless to regain altitude all the pilot can do is glide, trying to keep his vessel steady as he descends.  As it moves closer and closer to earth, prevalent winds determine where the glider lands.  Typically at USAFA it is to the South.

As followers of Christ we must accept that our power to live a life honoring to Him comes from a source other than self.  At the moment of conversion to Jesus, we are gifted with the power of the Holy Spirit.

“You shall receive power after the Holy Spirit comes upon you…” Acts 1:8

The Spirit alone, dwelling in us lifts us to new heights and causes us to follow on the right path.

“I will put my Spirit in you and cause you to walk in my statutes and you shall keep my commandments and live by them.” Ezekiel 36:27

The connection, much like the cable between aircraft, is intensely strong to hold us but not heavy to weigh us down.  It never becomes a burden.  In our attachment to the Spirit we are given freedom to make adjustments in our positions.  Some decisions to dip to the left or curve right are within our purview but they will not significantly alter the course we travel.

More importantly, in a posture of submission under His watchful eye we cannot mess up the journey.

“I will teach you and guide you in the way in which you should go.  I will keep you under my eye.”  Psalm 32:8 NEB

Only when we detach from the power source do we begin to lose altitude and struggle to keep our lives steady on our own.  This is when we risk veering off course and possibly landing South of God’s path for us or worse, we could crash and burn.

When our connection is tight and communication channels are open to hear from our Instructor, we may relax and be at peace.  We don’t fret over which way to turn but instead we trust fully in the wisdom of the One who leads.  The more we look straight ahead keeping our hands off the controls, the more we are pulled in the right direction.

We are not abandoned, at the mercy of every wind blowing our way.  Rather, we are securely tied by the bonds of transformation as the Spirit moves in our lives to make us more like the One we follow.  Whether we rise or whether we fall depends entirely upon our willingness to remain firmly attached to our power source.  He leads.  He guides.  We share in the thrill of the adventure, hanging on for the ride.   In so doing, we ascend to heights we could never have accomplished on our own.