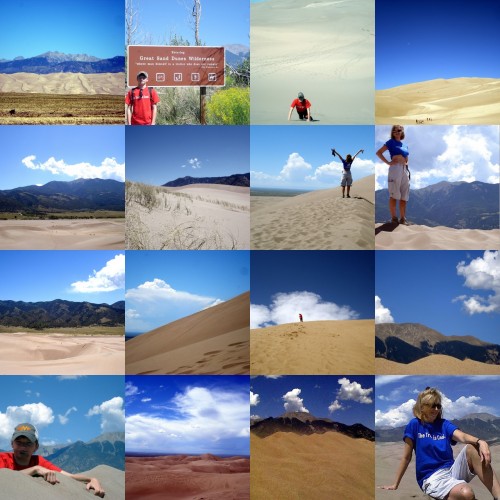 Miles of beach with no ocean, mountains with no trees.  Sounds like the worst of both worlds.  I mean, I love the mountains and living in the Colorado Rockies I regularly spend time hiking and/or driving admiring the beauty of the mountainous terrain, trees and wildlife.  And at least once or twice a year I run away from home to get an “ocean fix” somewhere to listen to crashing waves, gather sea shells and wade into the coolness of the sea.  So it was strange to find myself in the Great Sand Dunes Wilderness with nothing but mountains of sand. No waves, no water, not even a single sea shell.  No trees, no wildlife, no vegetation.  Just sand.

From the parking lot, the dunes don’t appear that challenging.  But within the first several steps of walking into deep shifting sand I was struck with the thought that this is not going to be an ordinary hill climb.  It was a bit like Michael Jackson’s moonwalk…I knew my feet were moving but they didn’t seem to be taking me forward.  I pressed on looking up to the top and calculating that I should reach it within half an hour.  That was my first mistake…miscalculating the “cost” of the experience.

Jesus said, “Who among you that does not bear his cross and come after me cannot be my disciple; for which of you intending to build…doesn’t sit down first and count the cost to determine if he has sufficient to finish?”  Luke 14:27-28

It didn’t take long to determine that this hike in & out of dunes would be much more strenuous than I originally expected.  Shoes full of sand & feeling as if I was navigating with cinder blocks on my feet, there were times when I congratulated myself for going 30 steps without stopping to catch my breath.  It didn’t help that I was there at the hottest part of the day.  I’ll have to ration my water supply or I’m going to run out, I told myself.  Not being able to drink in as much as I wanted was miserable.

I am nothing if not determined and so I continued for a solid hour to what I perceived was the peak.  Every so often I would turn to look down the mountain of sand at the poor souls just starting out, appearing the size of gnats, and because I could see how far I’d come already I was encouraged to keep going higher to the finish.  I was within a few feet of it when I was hit with the reality of a false pinnacle.  The climb had been so steep to this point that the view beyond was obstructed.  Only when I reached the “top” did I see that I had gone barely half way through this journey…there was at least another mile ahead of me that I had not expected.  My spirit sank and then it rebelled…that’s it.  I’m done.  No more.  I sat down with my half empty bottle of water and a piddly little snack bar that wouldn’t even begin to sooth my hunger pains…I wasn’t planning on being up there through lunch so I failed to bring enough to nourish my body.  I told myself the view from here is good enough.  I’ve got nothing to prove.   I’m not going on any further.  I sat down in the hot sand & complained by text message to a friend…

Ever found yourself there?  Sitting down in the middle of a half-finished journey, complaining that it’s just too hard to go on?  Possessing a sense of smugness as you compare yourself to others not as far along the climb?  Experiencing the sensation of going nowhere while the sands of life’s daily challenges keep shifting?  Heat pounding you as you struggle to climb out of a pit?  Feeling beat up by false peaks of life, where every time you think you’ve conquered some mountain in your path you find a bigger one up ahead?  So overwhelmed you’re able to move only short distances at a time before you feel the wind knocked out of you again?  Hungering with only a small snack in your spiritual belly because you failed to plan for the long haul? Parched & thirsting without living water to sustain you?

They shall not hunger or thirst neither shall the heat nor sun smite them.  For he that has mercy on them shall lead them, even by springs of water shall he guide them.   Isaiah 49:10

The refreshment of the Holy Spirit never leaves us.  Our place is to hunger & thirst after Christ, to come to the fountain and be filled, to never stop hungering & thirsting after the righteousness of God as we trudge in & out of the valleys & peaks of this thing called life.  We can give up when faced with ominous mountains in our path, telling ourselves that this view of God is “good enough”.  But what if we miss heaven, the angels, the Hallelujah Chorus?  What if we miss Christ altogether?  Let me encourage you to read Matthew 25:1-13 and diligently study the parable of the foolish virgins & the wise virgins.  Discover for yourself what it means to have a heart of good intentions but still not be prepared for the final part of your journey.

Exhausted, discouraged, hungry & frustrated I wanted the hike to end.  I justified why I didn’t need to go on any further.  But the words of a friend urged me in reply to my earlier whiney text message…“Quit texting and CLIMB! You can do it, Di !”  You can do it!  Someone believed in me at my lowest point and that was enough to keep me moving.  Three more ridges of false peaks and 95 minutes later I found myself at the pinnacle flat on my back making sand angels and singing the Hallelujah Chorus.

I was having a moment.  I had finally arrived.  A short while later came a second text from my friend… “look behind you at one set of footprints…”  The symbolism of Christ carrying me brought me to tears.

It has taken a couple of days to get the sand out of my car and my clothes and my ears!  But the exhilaration of reaching the top remains fresh in my spirit.  And the message of hope that inspired me is not forgotten.

When you find yourself in the dry desolate places, listen to the voice of hope from your truest Friend, the One who tells you that you do not have to go it alone.  He loves you so much that He cannot get you out of His thoughts!

“How precious are your thoughts toward me, oh God.  How great is the sum of them!  If I should count them, they are more in number than the grains of sand…”  Psalm 139: 17-18

In dry places, know that it is He who carries you through the desolation and He who will deliver you from it.

Posted in slice of life, teaching/sharing